From the Desk of the Mayor
Harrison Township, New Jersey

It is my hope that you are settling into this phase of my reporting of the COVID-19 information. You now receive this detailed, statistical update on Mondays, with an overview of The Numbers as reported by the New Jersey and Gloucester County Departments of Health. We are now comparing this data in one-week increments, as opposed to almost daily, which I was doing in the earlier stages of the virus.

We have added a second update in the weekly Happening in the Hill, which you all receive, known as the Mayor’s Message. That entry is meant to be less data driven and even contain non-COVID information (though everything seems related to this dominant topic at this point, doesn’t it?). Though some Happening messages may include COVID- related material, they will be more community-based. This shift is a direct result of the overwhelming response we have received to the weekly updates.

I cannot stress enough how appreciative we are for your feedback and input. If you’re following along, you’ll note that we have made adjustments in our reporting based on your input. That includes the transition to the Happening in the Hill’s Mayor’s Message segment. Many of you have commented on the regular (weekly) communications during this crisis and your desire for it to continue. With such a large following at this point, we agree, and it is our intent to provide you with both written and video statements on important topics like events in town or projects/initiatives that are in the works. Unless you attend township meetings, it’s impossible to keep up with all that’s happening, so the weekly Mayor’s Message with be a great way to stay connected. On occasion, we will include something light, like last week’s story on the history of schoolhouses in our community.

In Gloucester County, 115 people tested positive since last Monday, bringing that total to 3,706. The county has also recorded 38,788 negative tests since testing began back in March, making the county’s cumulative positive test rate 8.7%. Thankfully, the county death toll has remained at 213 since August 21st.

The positive test count in Harrison grew by 7 since last Monday. We have now had a total of 123 positive tests for the Coronavirus, and 1 death.

Since the Governor has taken significant action in the last few days related to restriction easements, today we include the chart that shows the data across the board, including the State. 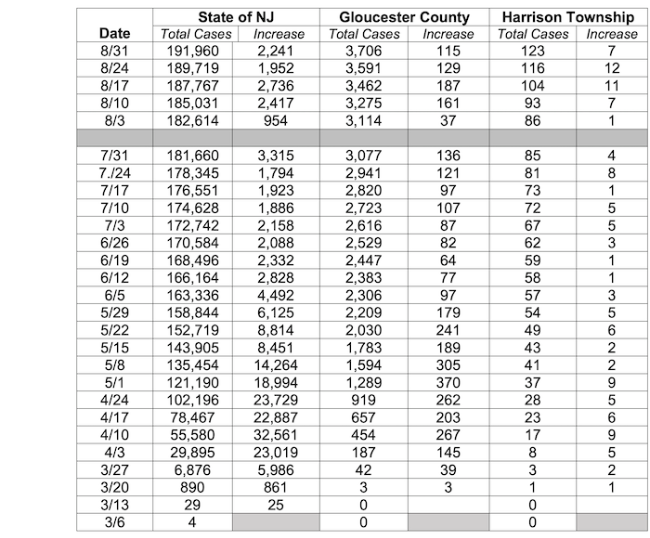 Recently, I was asked about the increase in cases here at home and if the age-range of the positive tests showed a trend? Once again, an inquiry from a resident prompted a deeper look at the data. After doing so, I can report that of the last 30 cases in Harrison, 21 have been with individuals under 40; and 13 of those have been teenagers. This indicates that the recent spike here is likely related to the commencement of high schoolers gathering and activities.There are protocols in place, which are being strictly adhered to, should a participant/player test positive. At this point, we are all well aware of the quarantine protocols within a household should a family member test positive, right? At the risk of accepting a “new norm”, it’s important for all of us to follow these directives to ensure that we protect those most vulnerable in our individual worlds. This is likely a permanent shift going forward. Elderly or health compromised family members and friends need to be more conscious of potential exposure to this (and future) viruses, which includes isolated themselves from anyone who’s tested positive.

CDC REPORT FINDINGS
Quoting an article on a CDC Report issued last week on the demographic characteristics, 94% of the deaths related to the COVID-19 virus had “comorbidities”, or underlying conditions, as referred to by doctors. According to the CDC, comorbidity is defined as “more than one disease or condition being present in the same person at the same time. Conditions described as comorbidities are often chronic or long-term conditions.” According to the CDC review done earlier in August, of the 161,392 COVID-related deaths nationwide at that point, 9,683 had died with COVID-19 being listed as the only cause on their death certificate.

I don’t think any of us are surprised by that stat and I point it out to emphasize the importance of adhering to the distancing, gathering and mask wearing protocols. If someone age 16, 18, 24 or 35 tests positive in your world, maintaining their isolation for the prescribed time is crucial. With no “underlying conditions, they are very likely to survive the virus, but it’s important for them to avoid contact with a Grandparent in their 80’s or and Aunt or Uncle with Diabetes until it’s safe.

NEWS FROM TRENTON
Late last week, the Governor announced that Gyms and Indoor Amusement facilities can open at 25% capacity, along with other restrictions, starting tomorrow. Earlier today, the Governor went a step further by stating that indoor dining can resume as of 6AM, this coming Friday, September 4th. Restaurants will also be limited to 25% capacity for the time being, with a list of other requirements that include distancing and mask-wearing when not seated and party size limitations.

This is on the heals of a pair of Bills in the State Senate and Assembly that received unanimous support on Friday to reimburse restaurant/bar owners for supplies purchased in preparation for the announced re-opening on July 2nd, which was suddenly cancelled by the Governor on short notice. We’ll see if those Bills are signed and executed.

In addition to the restriction easement for indoor dining, the Governor announced the same easement for movie theaters and indoor performance venues. He also raised the indoor gathering limits to 150 people, or 25% capacity, for religious services, weddings, funerals and political activities.

The time has come for us to balance the health and safety protocols with the freedoms we have been seeking. It’s more important than ever to call on the elements that make us Harrison Strong!

Together for Harrison Township,
Lou Manzo
Your Mayor

A message from Mayor Manzo regarding the Coronavirus COVID-19. Learn more